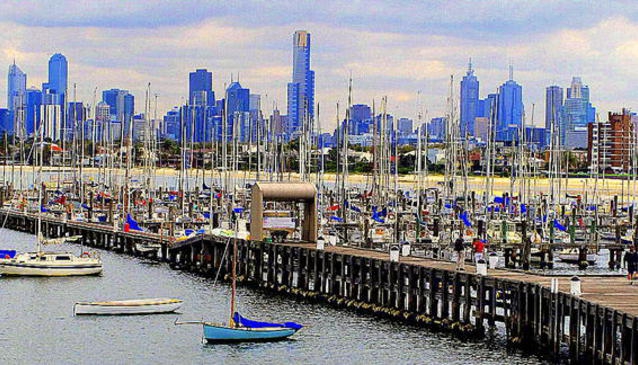 One of Melbourne's best-kept secrets.

In 1853 a wooden jetty was built where settlers used to unload timber, building materials and firewood. It washed away in a storm and was rebuilt a number of times since. The historic St Kilda Pier Kiosk was built here in 1904, and still survives over a century later. A Victorian Heritage site, it's a reconstruction of the original, complete with cast iron roof, decorative crest and weather vane. The modern café and restaurant, now known as Little Blue, opened in 2006, is located in the building behind the kiosk, in what is a former residence.

Located at the end of St Kilda Pier, the restaurant's huge windows offer unrivalled views of St Kilda foreshore, the Yacht Club and out towards the pretty bay area. From the restaurant one can also watch the locals as they sail, windsurf, cycle, rollerblade and fish. A well-kept secret here is a colony of around 1 000 penguins who have lived on the pier since 1974. They penguins spend their days feeding on small fish and are a landmark here on the pier.

Enjoy a glass of chilled wine, a taste of fresh beer battered fish served with chips while you savour the sunshine and light sea breeze. Food at the Kiosk restaurant is excellent, with emphasis on light meals such as baguettes, pannini, soup and simple seafood, accompanied by soft drinks, juices, milkshakes and ice creams - the perfect fare for a relaxed day on the pier.